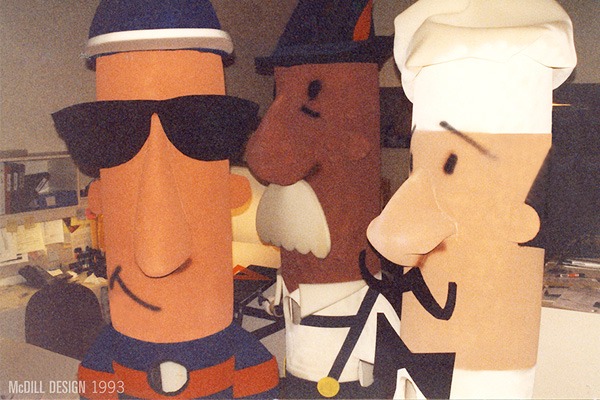 Design is often simply a matter of solving problems. The problems may be color and shape, or they may be image and perception, and sometimes they’re costumes. In 1993 I convinced Gabe Paul, then vice president of the Milwaukee Brewers, to bring the Brewers’ racing cartoon sausages to life. I just knew it was a great idea. When, after some initial badgering about that idea, I volunteered to actually make and run in them, he agreed. I’m not sure what I was thinking because I had never before made a costume of any sort except once when I went to a party as Mouseketeer Annette Funicello but that only involved a t-shirt that said Annette and 2 tennis balls.

But a costume is just another design project and before I left County Stadium that night I had mentally designed the costumes. So by the time I actually got around to making them, there was nothing to it, just tubes of foam rubber glued together and spray painted. Problem solved. For me, that was the challenge and once I had made and run in them (winning the first Brewers’ Sausage Race as the Bratwurst) I had accomplished my mission and proved to Gabe Paul that it, in fact, was a great idea. The reaction of the crowd confirmed my suspicions.

That was twenty years ago and it was a simpler time, no committees, no flag poles, no legal departments or VPs of procurement. Now, the racing sausages are a phenomenon in and of themselves, beloved, adored, bobble-head giveawayed and celebritized. A simple idea, simply executed without focus groups, crowd sourcing or research. Just sayin.’